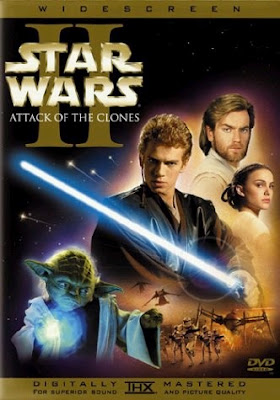 You can be the hero, mom or dad, when you accomplish both travel exploration AND obsession fulfillment by recommending Star Wars: Episode II - Attack of the Clones

, filmed in part in Italy and Andalucía, Spain, for family movie night.  Tunisia gets the most frequent mention by the films' scenery fans for the unusual barren landscapes of Luke and Anakin Skywalker's home planet, Tatooine, but this Attack of the Clones episode includes many scenes filmed on the gorgeous shores of Lake Como in Italy.  Padmé Amidala's (Natalie Portman) terraced garden retreat where she and Anakin (Hayden Christensen) hide out and get married is the 16th century Villa Arconati Visconti del Balbianello in the town of Lenno overlooking the mountains and waters of Lake Como.  Padmé's palace on her home world of Naboo is actually the Royal Palace of Caserta in southern Italy near Naples, an enormous royal residence inspired by the Palace of Versailles.  Some changes were made to the structure with computer graphics, but the visuals are splendid.  Other scenes on Naboo were filmed at the Plaza de España in Seville, Spain, the semicircular arched gallery where Padmé, Anakin, and R2D2 take a walk.


I doubt anyone needs a plot summary here of the Star Wars saga, nor a link to the trailer, so - if you don't (gasp!) own the prequel and sequel trilogies - rent it or queue it up on the DVR and enjoy the adventure.

Sound of Music
The Waltz King
Hans Brinker or the Silver Skates
When in Rome
Percy Jackson & the Olympians:  The Lightning Thief
Madeline
Winning London
The Secret of Roan Inish
Hogan's Heroes
The Moon Spinners
Heidi
Animated Heidi
Around the World in 80 Days
Anastasia
The Great Muppet Caper
National Lampoon's European Vacation
Young Sherlock Holmes
If It's Tuesday, This Must Be Belgium
Sonja at 12:05 AM
Share